Bored at home with your preschooler? I have a FREE ebook to help!send it my way!
You are here: Home / DIY / Trash To Treasure: DIY Fairy Garden
134 shares

This spring I brought out my crafting side to create my very first fairy garden. For this project, one person’s trash was my personal treasure! 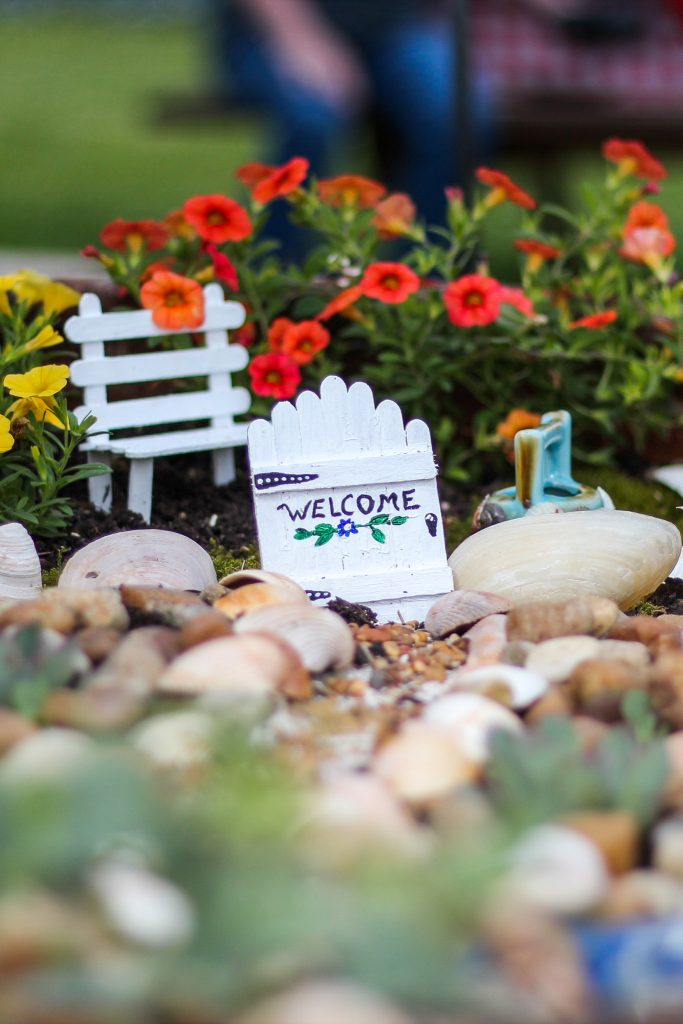 This post was done in a Spring collaboration with a few blogging friends of mine. Be sure to check out the links to their blog posts at the end of my post. You won’t be disappointed!

Fairy gardens have become increasingly popular over the last few years. I’ve wanted to make one of my own for a long time now but kept putting it off like I tend to do a lot of things. Year after year and there was STILL no fairy garden until this year!

If you’ve never heard of trash to treasure, it’s pretty self explanatory. The goal is to turn one person’s trash into something useful and/or beautiful. AKA treasure! I’m a lot more mindful than I used to be about simply throwing things away. I tend to look at “trash” a bit differently now.

My main goal in creating this fairy garden was to only use items I already had, apart from plants of course. I wanted to avoid purchasing all the fancy items in the store. Although adorable, it can also be very costly and the sustainable side of me just couldn’t bring myself to go that route.

Every now and then my husband will bring home popsicles as a treat. I have been saving the sticks and had no clue what I’d use them for but I’m so glad I did! The “enchanged garden” welcome door, fence to the dinosaur garden, bench, and door to the fairy house were all made from popsicle sticks.

The kids and I like to go on walks throughout the farm and I happened to notice a large trough just hanging out in the barn. It was completely useless and I immediately had the thought to put flowers in it. It has a giant hole in the side of it and my original plan was to have beautiful flowers pouring out the front and top. I was too afraid to go through with that idea though for fear that the flowers wouldn’t get enough sunlight.

Then along came my next idea, to do a fairy garden!

My husband filled the bottom of the trough with firewood as a filler, then poured several buckets of dirt inside and lastly he topped it off with some topsoil.

I debated quite a bit on what I was going to create the house with but ultimately decided to go with what we already had an abundance in, firewood! Obviously, it would need a roof too so my next task was to find something useful. I had saved some old plywood from last year that was too small to use for the floors. With a bit of wood glue, sticks and paint it made a cute little addition to the fairy house.

Any home also needs a door though! To create this, I simply glued popsicle sticks together, added some paint and glued a bit of twigs for added touches. I can’t forget my cute little mushrooms I made to go on the sides of the home. As I was going through the box of seashells I seen these and thought they looked just like mushroom tops. With just a bit of glue and sticks they made the perfect addition! 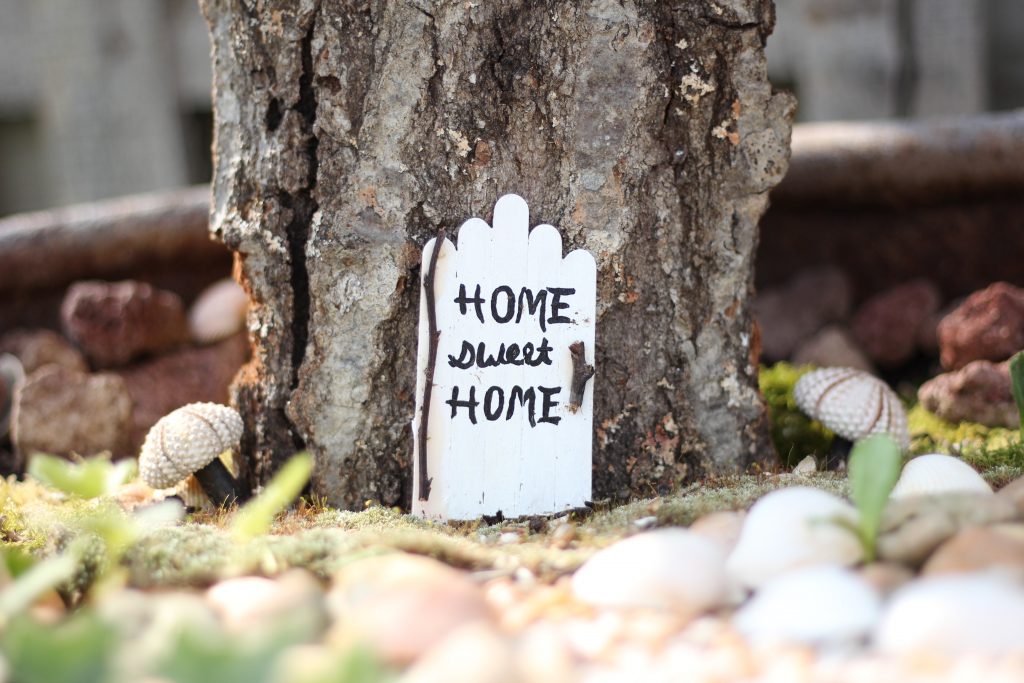 When designing my fairy garden, I knew that I wanted a magical area with flowers. I want this for my own personal home one day too but for now I’ll just have to stick with making fairy gardens magical. I envisioned a quiet area where fairies can go to relax, unwind and listen to the sounds of nature. I imagine that they chill on the bench sipping their morning coffee and reading a good book. I mean, that’s what I’d totally do if I were a fairy!

The “welcome” door was inspired from this post I found on Pinterest. I created it with glue, popsicle sticks, and paint as well as the bench.

I thought seashells would make an interesting take on a fence. Thanks to my mother in law, for letting me borrow her endless supply from the beach! She was also kind enough to let me use her wishing well.

No enchanted garden is complete without flowers of course! My 4 year old helped me pick out orange and yellow flowers at our local garden center.

I had a few different ideas in mind for a water source. I would have loved to have made a super neat waterfall but did not have enough glue. Thankfully though, improvising is my middle name. My mother in law came in clutch once again to help me make the river! We cut up a piece of her exercise band to look like water. She had some shiny diamond decor in a vase that helped make it sparkle. 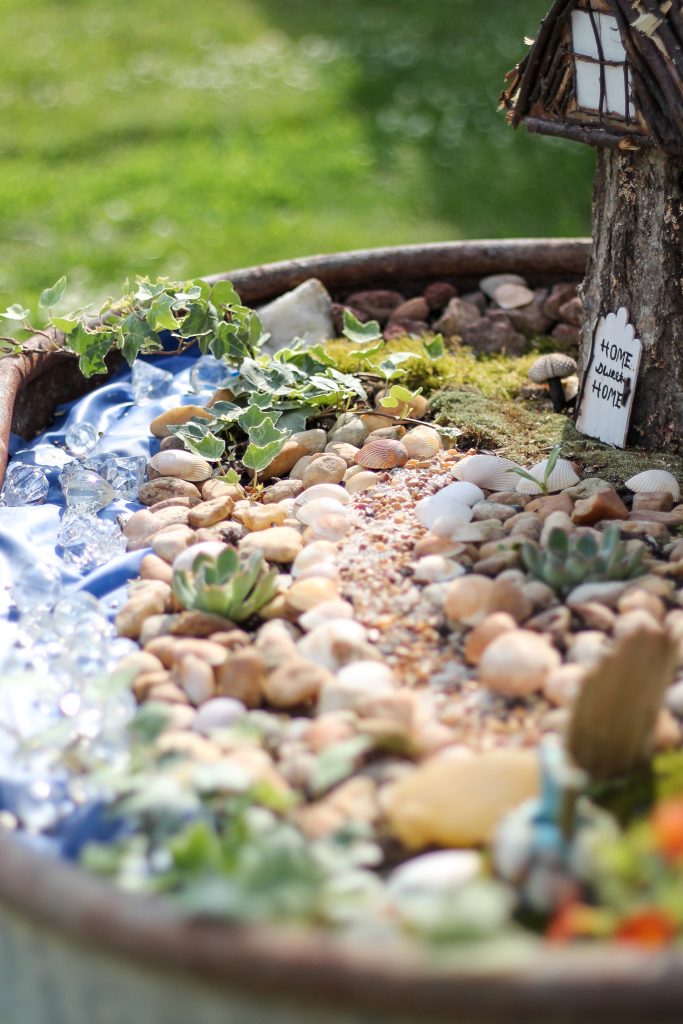 The pathway from the house to the enchanted garden was made with fish tank rock. We got rid of our old tank a couple of years ago and dumped the rocks outside. I went and retrieved them, gave them a good rinse and they were good as new!

The Odds And Ends

My fairy garden of course needed a filler because I wasn’t too fond of showing a ton of topsoil. I decided to gather up some rocks from the backyard and dig up a few patches of moss to add.

Lava rock was planted years ago near the power line and after digging some of that up from the ground I gave it a rinse and used it as a rock wall along the back side of the garden. The extra seashells were also scattered throughout.

I planted two succulents on both sides of the pathway and two vines which should eventually hang over the trough. I think that will be so beautiful!

Because I absolutely love hammocks I decided to make one for the fairies as well! I created their rustic hammock from extra canvas fabric and hot glued twigs as the stand.

Since I was afraid to put flowers in the bottom portion of the trough it became a dinosaur garden for the kids! I simply filled it with the topsoil, added rock for a cave and filled the rest with Wyatt’s toy dinosaurs, plastic trees, and cut up a plant from our old fish tank. The fence was created with popsicle sticks, glue and paint. 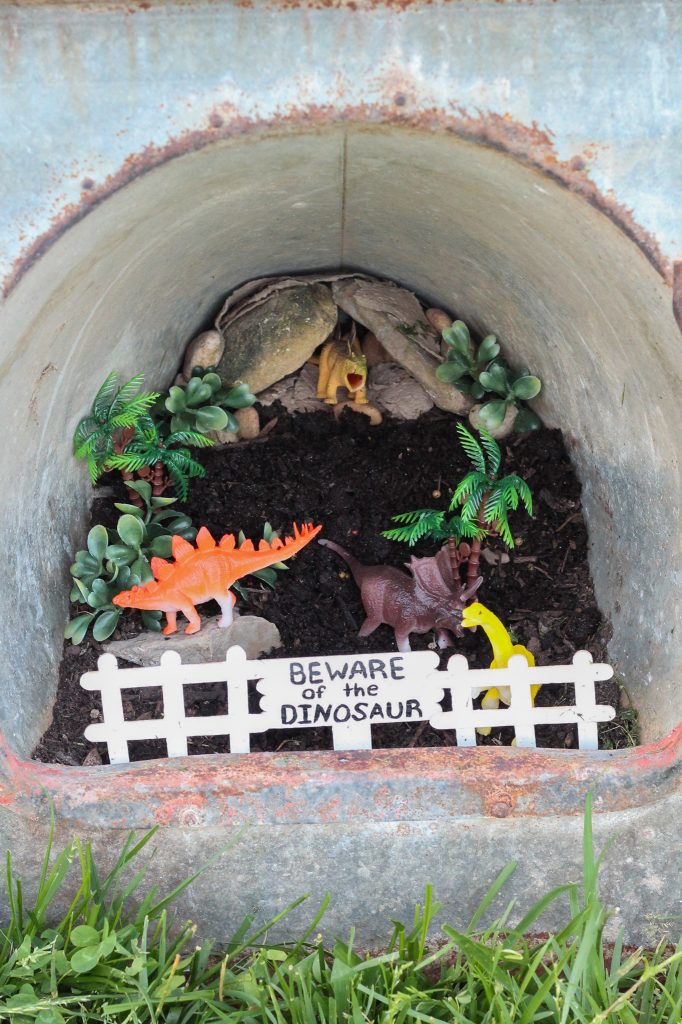 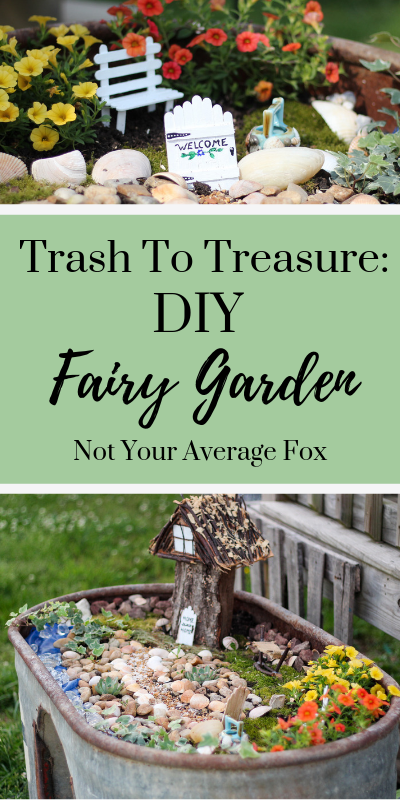 Check Out More Ideas For Spring!

Scribbles From Emily | How To Make A Spring Capsule Wardrobe

Our Gabled Home | 5 Ways To Use Elderflowers

Rain clouds and dead grass are what dreams are mad

I like to say that I hibernate in the winter. I to